I had high expectations when I entered the Noel Coward theatre to see Shakespeare in Love. Not only do I love the 1998 film, starring Joseph Fiennes and Gwyneth Paltrow, I had read this review which suggests the play ‘makes you feel grateful to be alive’. Happily I did not leave the theatre disappointed. This is a play I could watch more than once and probably laugh more each time.

The play opens with Will Shakespeare (Tom Bateman) overwhelmed with writer’s block and the weight of his audience’s expectations. He cannot write a word without the suggestions of Kit Marlowe, confidently played by David Oakes. The plot continues frantically on, with seamless scene changes due to the clever device of a moving balcony, to show Henslowe (Paul Chahidi) at the mercy of Fennyman (Ferdy Roberts) the money-lender and Viola (Lucy Briggs-Owen)as her impending marriage is about to be discussed. Throughout the rest of the play the audience is carried along on this constant motion until it is left to consider the final moments of calm. The play captures the vitality which makes the film such a pleasure to watch and adds to it. Jokes are piled on top of one another as characters verbally spar but this does not prevent serious notes entering the plot. Inevitably Will and Viola’s love will not remain untouched by its Elizabethan surroundings.Their audience is constantly aware of this, particularly due to the mentions of Anne Hathaway throughout. Nevertheless, the comical aspects allow some hope to remain.

Despite the absence of costumes as impressive as Martin Clunes’ outfit in the film I thoroughly enjoyed the evening. Tickets are currently being sold until 25th October 2014 so I’d definitely recommend booking some soon if you intend to go. They’ll be selling like hot cakes and this is not a play you want to miss!
http://shakespeareinlove.com/

Whilst I enjoyed the Matisse exhibition I  recently also had a very different, but also enjoyable, exhibition experience. The Dennis Hopper exhibition at the RA includes his photographs of famous friends, playful experimentation and a documentary of the era. Hopper stated that he used photography as a creative outlet which became unnecessary after Easy Rider was made and so the photos stop abruptly since he never carried a camera again.

The titles of the photos are often playful, encouraging you to notice previously overlooked details. They pick out graffiti in a crowded street, advertising in a bull ring and slogans on placards. This continues throughout the large high ceilinged rooms where the photos are displayed densely packed together, creating a sensation of layered experiences. There are hippies and Hell’s Angels alongside Martin Luther King and Andy Warhol, all belonging to the same era and defying clichés.

Through documenting such variety within an American generation Hopper appears to sympathise with all his subjects whilst remaining an outsider.

I’ve never actually watched Easy Rider but the clip which was included in the exhibition (and is also below) has made me want to watch it as soon as possible. The sudden outburst of colour in comparison to the walls of black and white photographs made the scene even more visually outstanding.

The exhibition remains open until 19th October and is well worth a visit by both those who are Dennis Hopper  fans and those who have never heard of him before.

The Crucible directed by Yaël Farber at the Old Vic is performed in the Round and really focuses on the dark, difficult and small lives that the inhabitants of Salem would have led. As soon as the news of the young girl’s seizures spreads through the town neighbours begin to pour through the hatch in the stage as they air grievances which have clearly festered for years under the pretence of concern. John Proctor’s entrance (played by Richard Armitage) brings a stubborn force to the room which refuses to bow to common opinion. He continues to hold this stance even as events escalate and the whole village first fears witchcraft and then the witch trials.

The ensemble performance of the village girls, led by Abigail Williams (played by Samantha Colley), was mesmerising. The effect of their fits and screaming made the village’s witch hunting hysteria understandable even if it remained repulsive. As each girl’s hair fell free from the previous constraints of headscarves during these moments the puritanical uniformity of the dark set provided the perfect contrast for the sudden array of colour on display. This attempted suppression of creativity and life is reminiscent of the anti-communist circumstances which led Arthur Miller to write The Crucible.

If you’re looking for a thoughtful play full of emotion then The Crucible is definitely worth a visit. It runs until 13th September so there’s still time… http://www.oldvictheatre.com/whats-on/2014/the-crucible/

Although I had heard much about A Streetcar Named Desire before through snippets and references I had never seen the whole play before and therefore never truly experienced how raw the play can be. Benedict Andrews has moved the setting of the play to the present day in his new production at the Young Vic, ensuring that no emotions are ascribed to period detail or quirks. The audience sits in the round and the stage itself constantly revolves slowly so that the Blanche, Stanley and Stella all seem trapped in the small apartment. The claustrophobia created draws the audience into the evolving and inevitable drama on stage. Even when a character is silent their presence is emphasised through the mundane actions that place them in the way even as they try to lead their lives.

However, this focus on the reality of such cramped living quarters does not diminish the ethereal qualities of the text where Blanche and Stella reminisce of ‘Belle Reve’ and now live at ‘Elysian Fields’. Blanche’s final exit is chilling in the emphasis on its simplicity. Those left behind  in the small flat may remain tied up in life’s struggle but this is clearly a world where Blanche could never have belonged.

Gillian Anderson has been rightly applauded for her role as Blanche –  she disintegrates before the audience’s eyes as she remains on stage  for the majority of the evening. Her Blanche is both terrifying and  fragile as well as flamboyant and scared. The suitcase she arrives with  continues to lavishly overflow with furs, jewellery and ballgowns but  Blanche has clearly not gained much from these material riches as  she stares out frightened past the audience.

The play’s run continues until 19th September and it will be  broadcast in many cinemas live on 16th September, both options are  definitely worth considering.

The attempt by the V&A to showcase several centuries of wedding dresses is admirable simply because of the inevitable range of the most personal dresses possible. They reflect lives, love and countless stories. I was amazed by the number of dresses that had clearly been passed down through the families before ending up in the V&A. 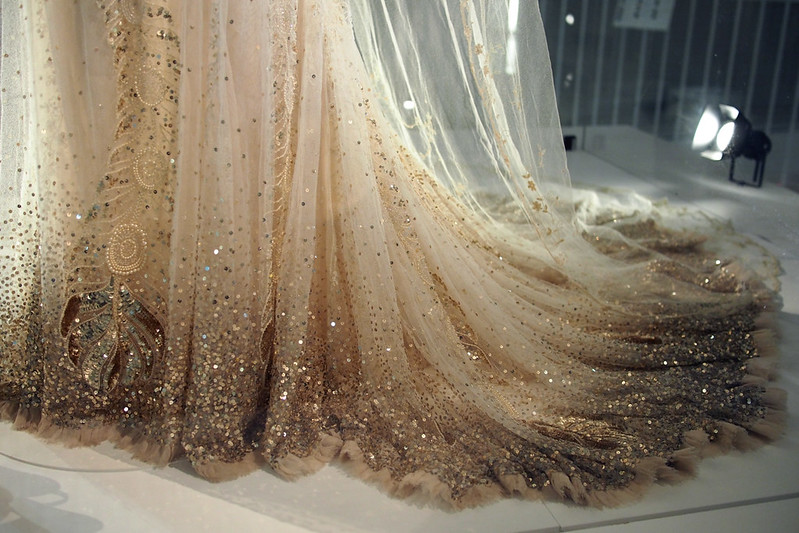 There was glitter, sequins, and beads. There were long dresses, short dresses, suits and dresses made out of parachutes. Weddings are often demonstrated to join cultures and countries together, with their symbolism being adapted for every occasion. They show that whilst fashions are constantly changing weddings will always contain moments of significance.

After several rooms full of white dresses Dita von Teese’s deep purple wedding dress was overwhelming in its sudden intensity. It meets the eye as you turn up the stairs from the older section to reach the upper floor. It was stunning and made me reassess the necessity of using white material to prove that a dress is wedding dress. The exhibition noted that although it was only after Queen Victoria’s wedding that the traditional wedding dress became expected to be white. However, as a reflection of a woman’s personality a white dress seems flat, a view which is compounded when so many white dresses can be compared against one another.

Nevertheless, the shape and cut of this white dress still allowed it to stand out from the crowd. I leave the best dress until last – Margaret Whigham wore this dress for her society wedding in 1933. It was designed by Norman Hartnell (who went on to design both the wedding and coronation dresses of Elizabeth II), taking inspiration from the recent revival of interest in the medieval.The inbuilt train is stunning in real life as it seems to spread out like an iced lake. It would definitely look magnificent down the aisle.

The exhibition continues until 15th March 2015 so there’s plenty of time to choose the perfect moment to go and see it.

Yesterday I went to see the much raved about Matisse exhibition at the Tate Modern with a friend. As it was a Saturday afternoon the gallery was full of a range of people; from those who took themselves very seriously to Italian mothers intently attempting to give their five-year-old children art history lessons to us, two fairly relaxed punters.

Despite the crush the exhibition was very enjoyable and almost therapeutic. It charts Matisse’s growing confidence in this new art form and his various experiments with what it could achieve. The opening rooms focus on the physicality of each work, which Matisse believed could not be reproduced in prints, through videos of the artist working and a comparison of the works and subsequent reproductions. As the exhibition progressed the cut-outs grew larger so that they eventually covered huge walls. In his own home Matisse began to cover all the walls so that paper tendrils would stir in the breeze, creating an almost living wallpaper.

Although the colours of the cut-outs were vibrant they were not garish or overwhelming. Instead the simplicity of each shade made it more important to focus on the shape that had been created – both with the paper and with the remaining white space. The series of Blue Nudes demonstrated this as each clearly suggested the human form using only two colours.

The exhibition is on until 7th September and I would definitely recommend it as it’s not often the opportunity  arises to appreciate artistic excellence with paper and glue.